I’m using ROSBot 2.0, and I’m trying to display the images returned by the RGB camera and the depth camera. To do this, I display the return of the topics /camera/rgb/image_rect_color and /camera/depth/image_rect_raw via the ROS image_viewer node on a remote computer.
This works well by setting all camera output video formats to QVGA_30Hz resolution (limited to 320x240) via rqt_reconfigure; but I would like to get VGA_30Hz (640x480) resolution output. Unfortunately, when I try to set this resolution for the depth camera, I get multiple “Depth Frame is corrupt” errors that greatly decrease the number of images available for the depth camera.

The errors are as following :

Thank you for detailed description of your issue. We will investigate it and send you response asap.

The issue occurs due to overflowing network capacity.
By default ROS is using uncompressed data to transfer images, this should be used only on local machine.
To view camera image on other computers, you should use compressed images.

Then on ROSbot launch astra camera as usual:

Finally launch image_view on your computer:

The Astra camera driver is using image_transport which automatically loads all available transport plugins, that is why you do not need to modify astra.launch. On the other hand image_view is using uncompressed image by default, thus it is required to specify image transport.

Thank you for your response.
I tested the image_transport plugin. It has indeed greatly reduced my bandwidth usage (from 5 MB/s to roughly 450 kb/s when I display the two topics via image_view), and reduced the corrupted buffer problems.
Unfortunately, the problem still appears. I have the impression that it is not only related to a bandwidth problem: when I display the topic /camera/rgb/image_rect_color (via

), the consumed bandwidth is then 4.5MB/s. However, I don’t have any problem of corruption on the rgb buffer. Conversely, when I display the topic /camera/depth_registered/image_raw (on which I want to work later, and displayed via the command : 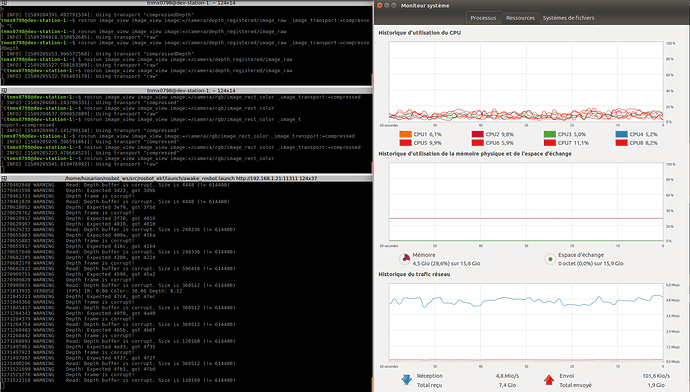 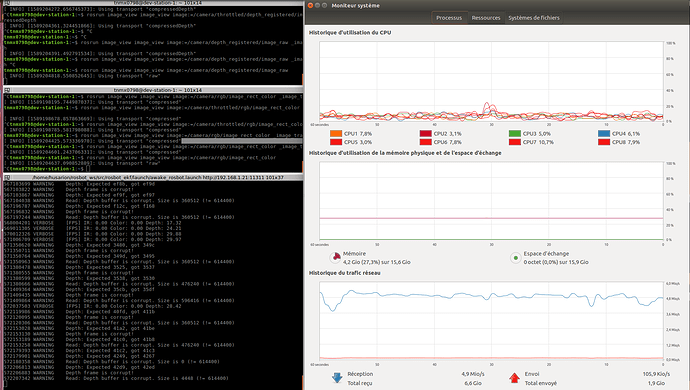 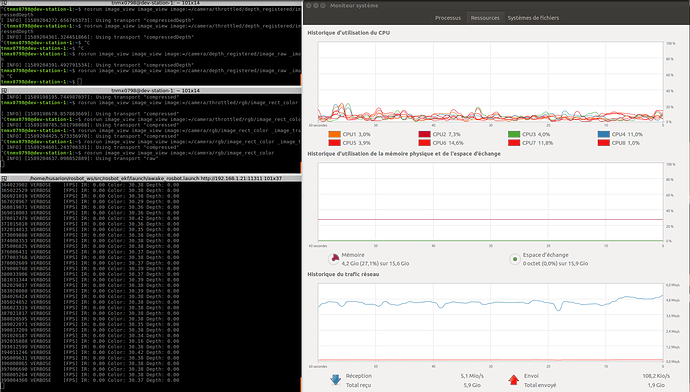 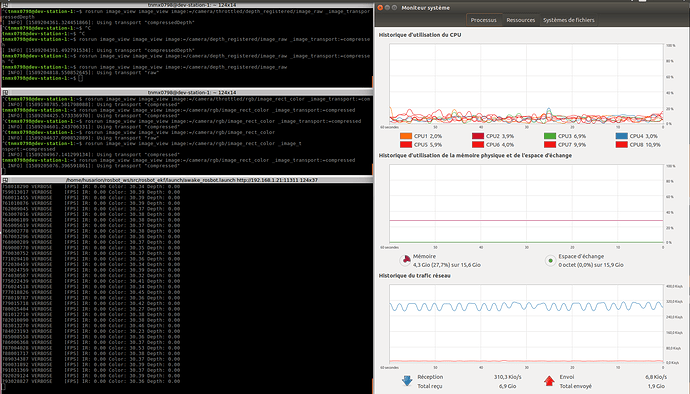 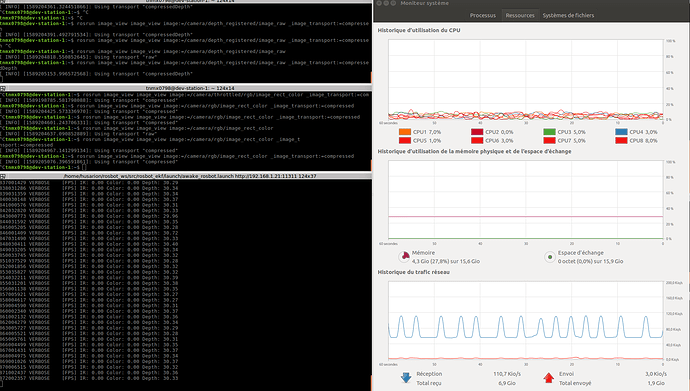 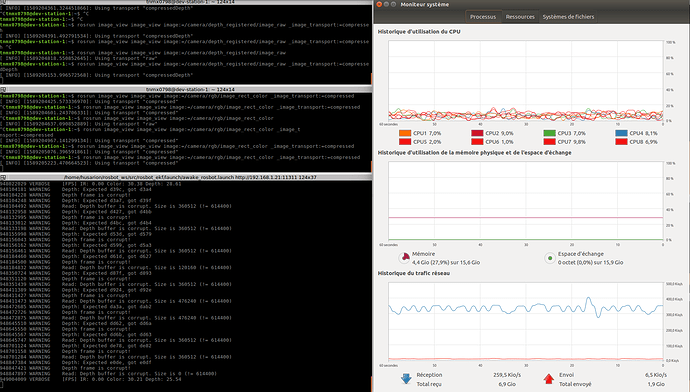 I would like to verify that the problem is not caused by other “non-ROSbot” factors. Would it be possible for You to make the same test with different network connection and workstation?

Sorry for the delay of this response. I have not been able to test this with a different workstation, but I have been able to test it with a different network connection.
Here are the results with an optical fiber (the previous results were obtained via a VDSL connection, having less bandwidth). There is better performance for the uncompressed depth_registered/image_raw topic, and perhaps a slight improvement for the compressed depth_registered/image_raw and compressed rgb/image_rect_color combination (despite the persistence of corrupted depth buffer errors). Otherwise, the results look about the same on both connections. 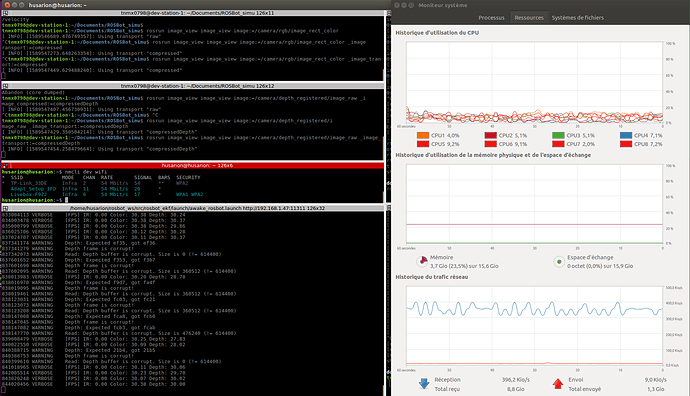 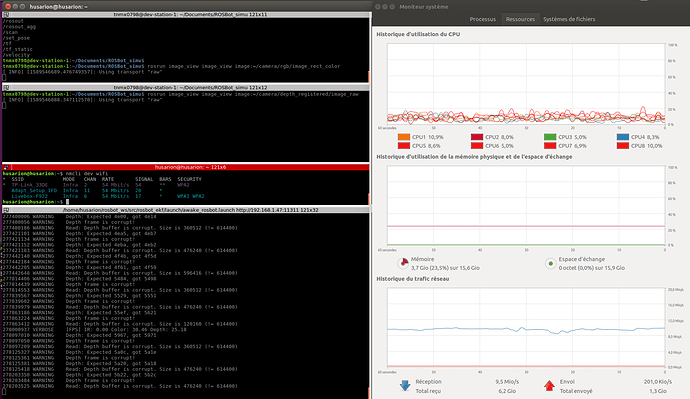 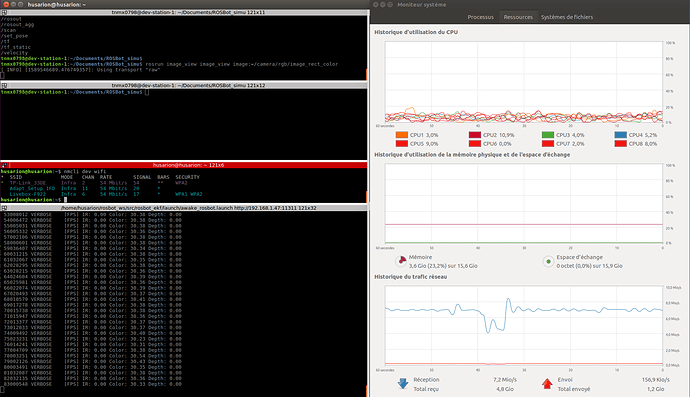 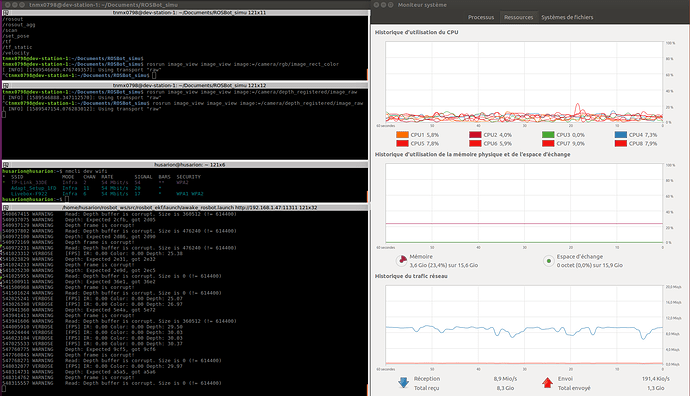 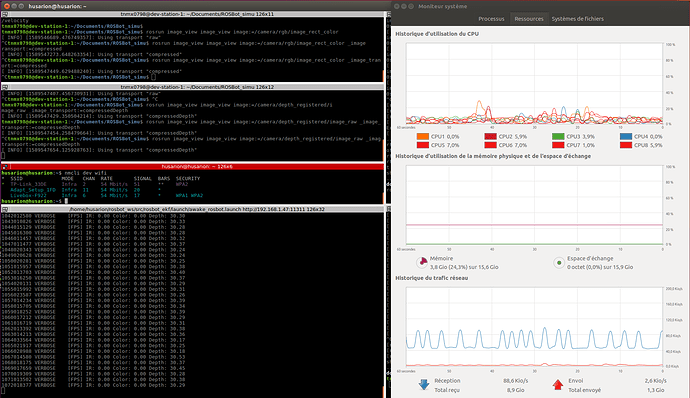 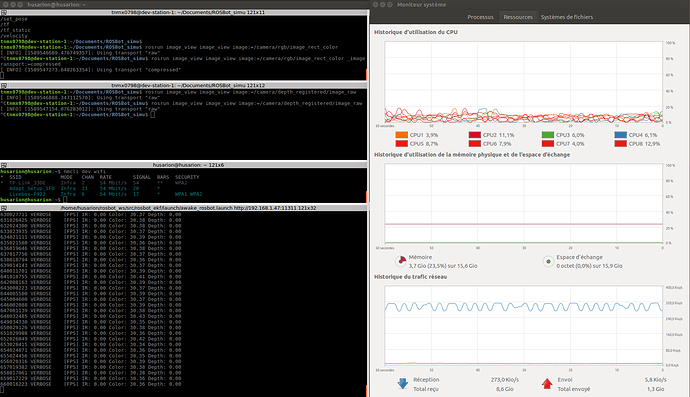 I will try on another workstation and get back to you.

I did a similar ticket here in the forum:

I see the same problem also if the receiver of the camera data is inside the robot. So, no external network interface is used, only the internal loopback interface.

If you use a faster external connection (like fibre) than you have better results because the network packets are processed faster by the hardware and a packet fragmentation does not occur so often.

In my ticket, I described what I think what happens in the software of RosBot: The internal network reciever software part is not aware about the fact that network packets can be divided into several fragments and a receiver (internal or extern) must collect as much packets as needed to fulfill the read size.

I think, this is here the problem.

Like I said in the post you linked. I guess it’s better to ask maintainers of ROS on how it is implemented.
The only thing I can say it that indeed ROSbot wireless connection is not the fastest for current standards. We are working on changing that in newer models.