I am writing to request some help regarding the issues about controlling two Rosbot.

Our Task: want to control two ROSBot, each ROSBot is connected to a laptop that runs a control algorithm (see the attached figure).

Question: How can we use two ROSBot simultaneously? What could be the reason that the algorithm slows down whenever a second robot starts running (it seems that the two ROSBot are affecting each other even when we connect them to two different routers)? 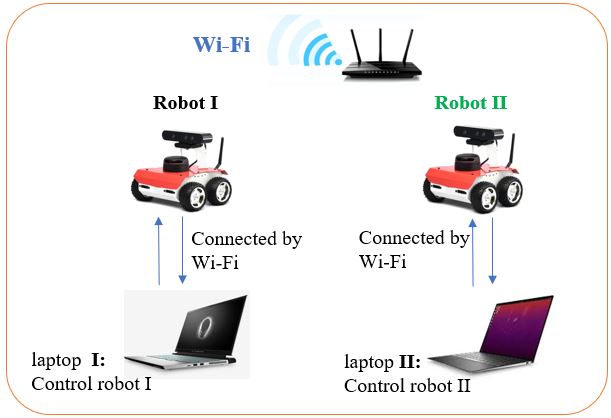 Could you attach the Ethernet adapter to the robot and test it without WiFi?
This seems like you have many WiFi networks in the area you are testing the algorithm and both routers chose very similar frequencies and so both ROSbots might be still disturbing each other’s transitions.
You can try moving the entire setup to a whole different place where you are sure there are very few WiFi networks. But first just out of curiosity, consider trying running robots using the Ethernet.